Hey! It's been awhile and it's already a new year. Can you believe that it's 2010? I can't. Well, I just read my last post about Daniel's new job and I am going to add on to it with this one. Daniel is no longer going to be working for QuicKutz because he got back into BYU! Ever since we got back from Korea we ran into so many obstacles to continue Daniel's education. It started out with some shocking rejections from universities we had applied for (ones we were sure we were going to get accepted to). After waiting and hearing back from all of them we had to change course. Daniel still wanted to do a PhD in Economics so we just had to find a different road to get there. Daniel finally decided on trying to get a Masters in Mathematics. We found that BYU was the best option for us. Since Daniel had gotten a minor in mathematics he was only two classes shy of being fully prepared for the workload in the masters program. That's where we ran into some more problems. Had it been a couple of years ago, it would have been much easier to get back into BYU as a post-baccalaureate student but now BYU is experiencing it's highest numbers of all time for undergraduate students and they did not want to let Daniel in. This was disappointing since Daniel had spoken with a couple of professors in the math department and they were confident that he would be able to get in and take those two remaining classes.
Well, meantime we needed to get a job. We were thinking that maybe we would have to work for awhile and then try and get in to school a little later or something. First, Daniel worked with a gardening company as a field rep. going to the different Home Depots and Lowes from Ft. Union down to Provo checking that all products were in stock and properly displayed. He built different displays and made a few waves with the company with some of his creative ideas. He then got a job offer from QuicKutz to work in international sales. Not only did this job offer a much higher salary but it was working in more of what Daniel had studied in school so far. Plus, he had a chance to work with people using Spanish and possibly Korean. We took the risk and took the job with QuicKutz. Not too long after that the company ran into some major problems and Daniel actually was laid off....for two days. During those two days Daniel worked really hard trying to find a way to get back into BYU. Thanks to some friends he was able to work with a professor closely who sits on the graduate studies committee for the math department and was able to get admissions to seriously consider Daniel's case. Did I tell you he was laid off for two days? We thought he was laid off for good at that point but the company called him back and told him they wanted him back. After all the stuff with the university Daniel told them that he would come back and work but he might be starting back at school. QuicKutz told him it was fine, they just needed him. After the holidays we found out that admissions had reviewed his case and accepted him as a post-baccalaureate student for winter semester! We both were sooooo happy! We were so worried about what we were going to do and how we were going to get to our end goal. So now, Daniel is a BYU student again taking those two classes that he needed to get to grad school. If he does well, he has a better than good chance of getting into the Math graduate school.
Phew!.....
We had a wonderful Christmas. We were able to do a few things for other people that really brought the true meaning of Christmas to my heart and I really hope that Maya felt it as well. I got to see the wonder and joy of Christmas through Maya's and Vivi's eyes. And we spent it with family and it was great. During the Christmas holidays Daniel's mom and sister and brother-in-law moved back down to New Mexico. We will definitely miss them but we know that it was the best thing for them. We rang in the new year with my parents and I found out that I am actually only 22...according to the Wii Fit Plus. Ha!
With Daniel back in school and us a step closer to our academic goal, I feel like this year is going to be a great one. I heard on the radio the announcer talking about taking some time out to think about the past year and what you have accomplished and then writing down what you want to do for this new year. I think I am going to take a pen a paper and write down some of the things I want to make happen this year. I feel so much motivation and hope! 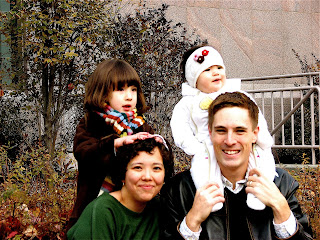 Posted by marquita chiquita at 4:26 PM

I was so happy to see a post from you, Marquita! I love hearing about your little family...I love you guys and I miss you so much! And your family picture is the definition of adorable. :) I'm so happy the life is on track for you and Daniel. :)

Congrats you guys! That is great news!! Good luck with your classes Dan. :) Cute family picture!

Thanks for the story! It is amazing to look back and see how things "were falling into place" when at the time it seems like it is falling apart! I'm proud of you guys for sticking things out! Good luck with the new plan! Cute Cute picture!