On the Hunt for the Elusive Grayling

Hey everyone, sorry it has taken me so long to post. Since my last post so many things have happened that it is almost overwhelming to talk about. So for this post I will only talk about our camping and fishing trip and I will just post pics later for the other things we did.

This weekend Daniel, Maya, and I went up to the Uintas for a family camping and fishing trip. Daniel is on the hunt for the elusive grayling. This is a fish that he wants to catch. One of a few that he hasn't caught yet. Being the avid fisherman that he is, he searched and studied long and hard where he could actually catch these fish. He found that there are a few lakes up in the Uintas, past Heber City and Kamas, where there are grayling along with brook trout, another fish he has yet to catch. So Thursday night we made preparations and we left Friday, right after Daniel got home from work. We drove right up to the Uinta national forest and we couldn't believe how beautiful the scenery was. We also saw a ton of wildlife as we drove. We saw like a million mule deer (so many that we were afraid that we would hit one of them), yellow-bellied marmots, and my favorite--sandhill cranes. 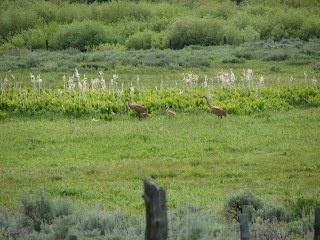 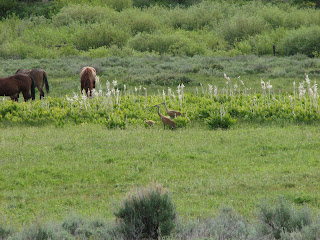 We found an awesome campground right on one of the many lakes on the Mirror Lake Highway. We camped right on Trial lake. It was absolutely gorgeous! We got there around 7:30pm. Just up from us was another campground on yet another lake, Washington Lake. Just up from that campground was the Crystal Lake Trailhead where we went hiking the next day.

here are some pics of the campground we stayed at: 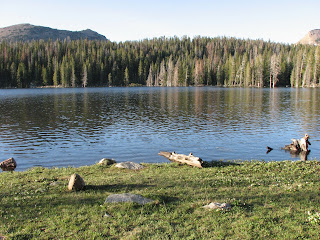 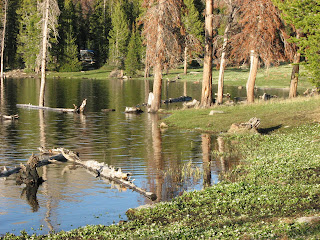 and yes, I helped put our tent up! Here are some more pics of our night at Trial Lake: 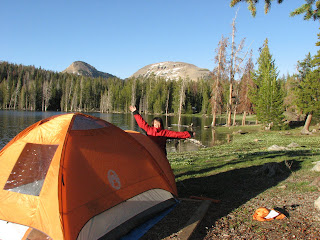 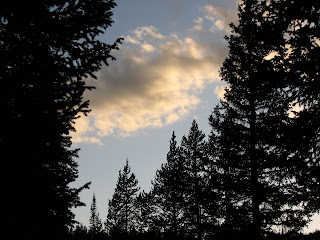 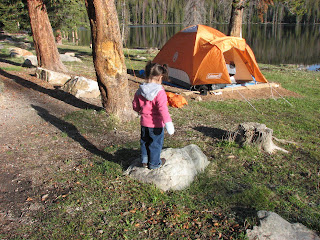 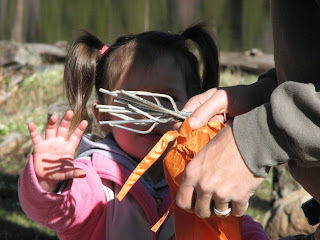 We built a fire (well, Daniel built it) and enjoyed a nice rugged meal of tinfoil dinners. Basically, I made two mini meatloafs, placed them on tope of sliced potatoes, and topped them with thickly sliced onions. We enjoyed these with some sliced frenchbread and grapes that we borught with us as well. It was delicious especially after all our travelling and setting up camp. Here are some pics of the food and Maya and I patiently waiting for them to be done. 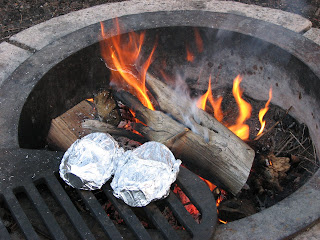 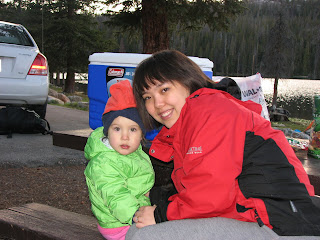 It was really fun to enjoy nature together. The only thing was that after the sun went down, it was so dang cold. Besides our sleeping bags we brought 3 big blankets to help keep us warm through the night. Daniel and I were both worried that Maya wouldn't sleep at all. She tends to not sleep if she is overly excited or scared. But to our surprise she was the first one asleep once we got her all tucked into her sleeping bag. She was way excited at first to be in the tent. She was jumping all over the place and screaming out of sheer joy! I wonder what the other campers thought :) I told Daniel not to wake me up until after the sun had come out and the place started to warm up. Funny story: so I woke up thinking it was pretty late in the morning since it was light out. Maya was still snoring away and I thought that Daniel had gone out and started the fire. I got up and looked over to where he was sleeping and all I saw was his sleeping bag folded in half (or so I thought). So I commenced getting ready so that I could help him outside and get breakfast started. Then all of the sudden his sleeping bag started to move and I totally freaked out. He was still inside his bag just all curled up and he had cinched up the hood of his bag (he has a really nice mummy bag) so I couldn't see him. He looked at his phone and it ended up being only 5:30 am! He made fun of me and how he thought that he would have to drag me out of my bag and carry me to the car.

So we had a nice breakfast of eggs, potatoes, and ham and we packed up all our stuff ready to go hiking and fishing that day.

Like I said we went to the Crystal Lake trailhead where you could take a few different trails depending on which lake you wanted to go to. Daniel was on the hunt for grayling so he planned that we would go to Marjorie Lake whose trail forked off of the main trail to Long Lake and some others.

here we are starting off on our hike (we had to bribe Maya with licorice for her to follow us): 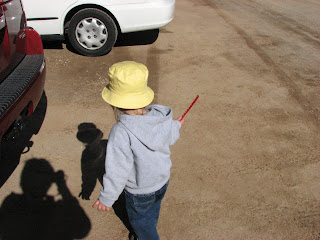 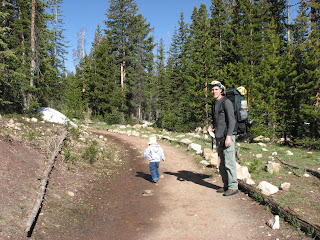 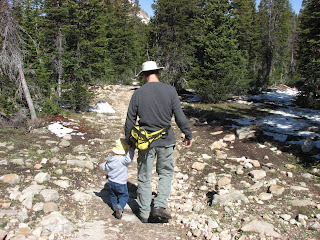 The hike was absolutely gorgeous. It is like the first part of the Timpanooki trail up TImpanogos. There was still snow in the shaded areas. After a while we came to the fork where we needed to take another trail to get to Marjorie Lake. After taking it we found out that we were the first ones to take this trail since it snowed (and maybe since they opened the trails!). We came to a point where there was so much snow that we couldn't see the trail anymore. But we kept on hiking. Daniel was sure that we could find it (he had a topographical map, so we knew the direction we needed to head). Well we came to a small lake that we thought was Marjorie, but upon looking at the map we realized that we had to hike further. So away we went, not knowing where the trail was exactly, only thinking it was closeby. Well, after about 2 hours and not finding the lake, we determined that we were a bit lost and needed to find the trail again. What an adventure. To tell you all the truth, I was a bit worried, especially since we had Maya. But Daniel knew what he was doing and he eventually found the trail and Marjorie Lake (or so we thought)!

here are some pics of the scenery and us lost: 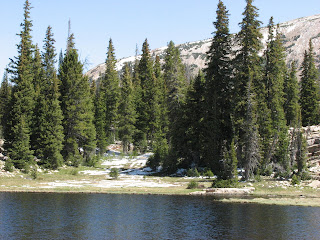 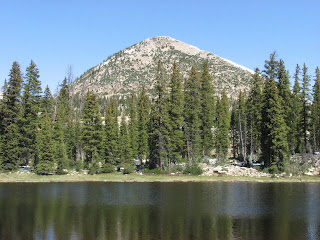 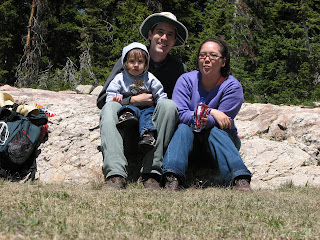 After we got to what we thought was Marjorie Lake we rested for lunch then commenced fishing. We all wanted Daniel to catch a grayling so that all that wondering off trail would have been worth it. At first the fishing was slow. Nothing seemed to be biting. But, Daniel is a true fisherman, and through some careful observation and a few chanced coincedences, he figured out how he could catch (a lot) of the brook trout he seemed to be seeing a lot of. After he caught his third brook trout I began to wonder how we were going to catch the prized grayling. It seemed that the Brook Trout enjoyed staying close to the shores of the lake, maybe the grayling liked the middle of the lake which could only be accessed by boat. But we enjoyed the fishing immensely. I got so many bites and finally I caught my first book trout! I also caught another one and we had it all the way up to the bank but as Daniel was trying to grab it, it fell back into the lake and swam away. Lucky day. We caught 7 brook trout total (me:1, Daniel:6). It definitely was so much fun. Maya also had a blast running around picking up assorted rocks and tossing them into the lake. She also got a kick out of the huge black ants that were there.

here are some pics of us at "Marjorie Lake": 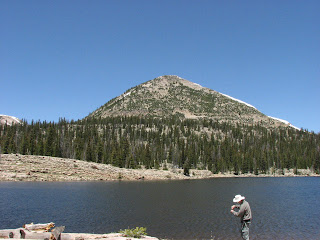 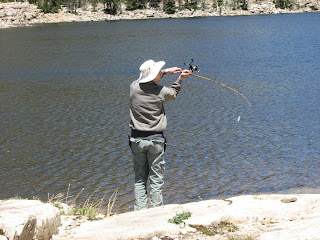 some pics of the brook trout: 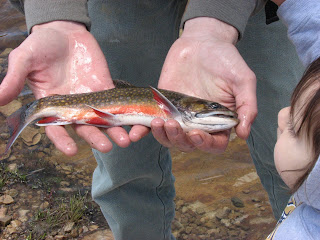 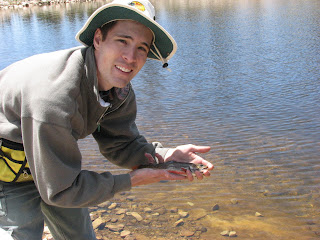 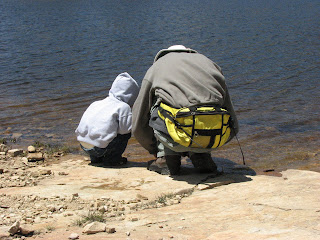 So what about the grayling, you ask. Well, After Daniel had caught his third fish and while I was fishing, he was wandering around with Maya and saw a sign. The sign said that we were at Long Lake! That's right. We never made it to Marjorie or it's prized grayling. That explains why we were only catching Brook Trout (the only fish in Long Lake are Brook). Daniel told me about this discovery as we were packing to leave for our hike back. We both had a long laugh and commenced back for our car. Needless to say our hike back was a lot shorter since we didn't have to wander aimlessly for 2 hours. We were definitely sore, sunburned, and tired, but we had a blast.

I guess the grayling will have to wait for next time.
Posted by marquita chiquita at 1:00 PM

You're such a good wife to go fishing with your husband...I can't say that I enjoy it that much, myself. :)

Maya is such a cutie. It would have been fun to see her all excited about the tent.

well, I usually don't like to go fishing especially if nothing is biting, but it was really exciting this time!

Okay, that picture that you put up of Maya makes her look SO old! I can hardly even believe it!

We just went camping last weekend. It was the first time in a long time. We didn't get much sleep, but it was fun!